On his show one day, Frasier tells his caller Jeremy that Niles used to wet the bed. Although he doesn’t mention Niles by name, Niles and most of Seattle realize who Frasier was talking about. Niles is of course angry with Frasier. A few days later the Cranes, plus Daphne, head to Boston. Frasier is giving a speech at a conference and Niles will be making the introduction. At the airport, Frasier meets his old friend Cliff Clavin, who thinks Frasier has come for his retirement party. Not wanting to disappoint Cliff, Frasier says that’s what he’s here for…much to Niles’ annoyance, as he has booked seats at an exclusive restuarant. At the party, Martin bonds with Frasier’s friend Norm Peterson, Daphne is fascinated with Cliff’s stories and Frasier is enjoying telling everyone what it is like to be famous. Only Niles is not having a good time, until Carla, the waitress from Cheers, tells him some embarrasing stories about Frasier, which Niles decides to use in his introduction. Cliff ho 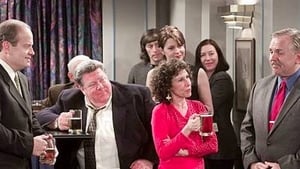 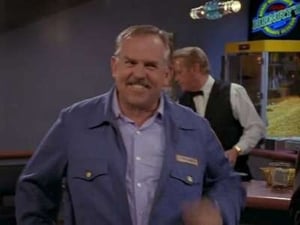