Frasier is delighted to hear that he’s been awarded a lifetime achievement award, but freaks out after he receives flowers from his mentor with a card that doesn’t say exactly what he hoped. Moments before the awards dinner, Frasier goes down to his mentor’s office and confronts him about the reason he wrote what he did in the card, and soon beings a ride of self-analysis and looks back on his life, wondering why he feels so empty despite all his achievements. Meanwhile, Martin tries to reassure Niles he’s just as good a psychiatrist as Frasier, even though he’s not receiving any awards, and Roz wonders why Daphne is putting on so much weight. 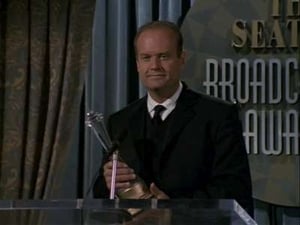