Frasier hires an authentic English butler after his original boss passes away, achieving one of his many fancy dreams. Ferguson is great with the Cranes, and it doesn’t take him long to start giving his opinions on the family routine. First he gives hints to Frasier on how he can charm opera board members and perhaps even get invited to join them. After that he warns Daphne about employee/employer relationships and how the social barrier is never broken. He helps Frasier organize a fancy dinner party, and Mel unexpectedly shows up, ruining once more Niles and Daphne’s plans of being together. When Mel agrees on spending New Year’s with some friends in the company of Niles, he draws the line and breaks up the entire marriage scam they were carrying on. Mel is devastated, and Daphne, relieved. Seeing that true love between boss and help can exist, Ferguson resigns to chase after someone he cared deeply, but never had the courage to do anything due to the social barriers. 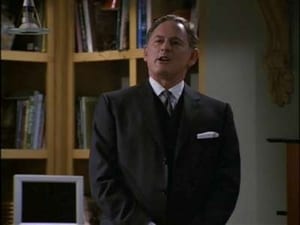