Frederick is coming to visit and he wants to visit Microsoft. Frasier has been unable to book the visit and so takes Frederick to KACL instead. Frederick meets Bulldog and finds out that the KACL softball team is one man down as Roz injured herself during a game. Frederick suggests that his father play, and not wanting to let Frederick down, Bulldog says Frasier is too good for the team. Frederick insists to his father that he should play, since he’s “really good.” Frasier doesn’t want to let his son down and so agrees. Of course, he knows nothing about baseball, so Martin takes him down to the park for some practice. Can Frasier learn how to play in just a few hours? Not very likely… Meanwhile Niles is jealous of his nephew’s crush on Daphne, and how much attention she’s paying him. 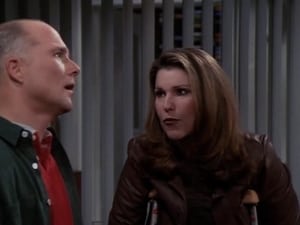