Frasier treats a woman who has a phobia about clowns. He plans to don a clown costume and full make-up as part of her treatment. Martin sneaks into Frasier’s office and scares him by coming up behind him with one of Frasier’s masks over his face. Frasier does not find this amusing, so Martin repeatedly teases him about being a “fuddy-duddy.” Frasier decides to retaliate for the prank. He tells Martin that he is leaving the apartment, then puts on the clown costume and rings the doorbell. When Martin comes out to answer it, Frasier jumps out, wielding a cleaver. Martin collapses and suffers a mild heart attack. Frasier feels incredibly guilty about his actions, and is humiliated in the waiting room when the nurse reads off an account of what happened. Martin recovers quickly and returns home, but doesn’t want to tell Ronee about his health crisis. 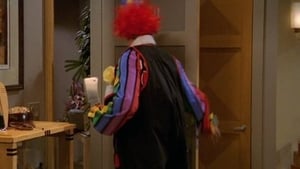 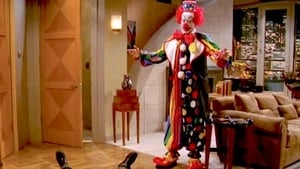 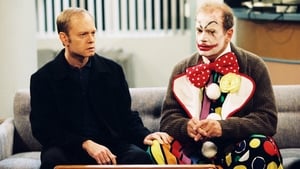