The Devil and Dr. Phil

Frasier learns that Dr. Phil McGraw is in town for a special. The two are old friends, but Frasier is angry at Phil for supposedly swindling him out of $200 in a poker game. He reluctantly agrees to take the star-struck Roz to the set to see him. Frasier is surprised to find that Bebe Glazer is Dr. Phil’s agent, and becomes extremely envious. He wonder if she might be able to elevate him to the same level of stardom as Dr. Phil. Bebe agrees to meet with Frasier to discuss the matter, but also wants to seduce him. Frasier believes he can get Bebe to cave in by just teasing her with the possibility of sex, but Niles warns that the situation seems very dangerous. Frasier winds up running out of Bebe’s room in a panic. Bebe shows up at Nervosa and tells Frasier that she wants to leave Dr. Phil for him, as she prefers a challenge. He excitedly agrees to increase her fee, even though she has already managed to cost him his stint at the Spokane station. He has no idea that Bebe never actually worked for Dr. Phil. Phil had only played along with her scheme to win back Frasier so that he could pay off a gambling debt. Meanwhile, Martin’s supervisor punishes him for refusing to date his sister by assigning him to the graveyard shift. Martin begins to lose his mind due to the odd hours and lack of human contact. Niles and Daphne become fascinated with an older couple whom they view as future versions of themselves. 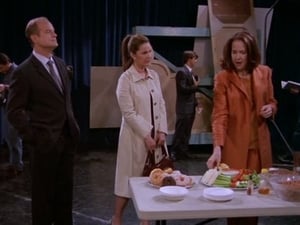 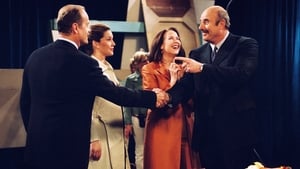