Frasier’s co-workers cajole him into helping them build a house for Habitat for Humanity. Frasier mostly seems to get in the way, and his participation is limited to stirring paint and a little bit of sanding. However, he somehow views himself as having played some huge role in the process. He becomes very attached to the house, and keeps showing up to offer the inhabitants unwanted decorating advice. Roz tries to convince him that they should be allowed to furnish and decorate the house in whatever way they see fit. Martin and Eddie give a presentation about safety to an elementary school class. They are a big hit, and the school asks them to return for an assembly. However, Martin comes down with a fever and is unable to go through with the speech. A reluctant Niles is forced to take his place. He blames the children for making Martin ill, and winds up impressing the kids with a lecture about germs. Daphne and Mrs. Moon get into a huge argument about her mother’s increasingly difficult behavior. After Daphne suggests that she help around the house, Mrs. Moon responds by getting a job at Cafe Nervosa. She hopes to publicly embarrass Daphne and shame her into apologizing. Daphne, however, is nonplussed by her mother’s behavior and gladly accepts her paycheck. 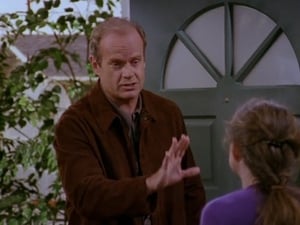 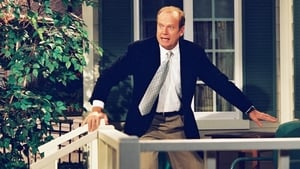