Niles and Frasier plan a party to celebrate the unveiling of a painting that Niles has just purchased. However, Daphne notes that every event the brothers host inevitably ends in disaster. She suggests that Niles instead host the party with her. Frasier is hurt to learn that he will be excluded, and says that he will not even attend the party. Daphne believes that she has everything under control, but things quickly begin to unravel. Alice writes her name in crayon on the painting. Daphne remains calm, and gives Roz the name of a man whom Niles uses to restore artwork. However, the game hens catch fire in the meantime. The caterers are too busy to replace them, so Daphne must turn to Frasier for help. He comes over to assist with the food preparation, but must hide in the pantry whenever Niles comes in the kitchen so that his role will remain a secret. Frasier becomes angry when he overhears Niles and others complimenting the food and saying how much better off they are without Frasier’s involvement. Mike Shaw, the artist responsible for the painting, shows for the party after earlier declining his invitation. He doesn’t care for the stuffy guests, and decides to go upstairs and watch pay-per-view boxing with Mrs. Moon. Niles hears a couple’s description of Shaw (white-haired man in a flannel shirt using a cane) and assumes they have him confused with Martin. The couple who met Shaw has to leave. Martin arrives to bring Frasier some dishes, and winds up having to pose as Shaw for the other guests. Roz asks Daphne to stall the unveiling because the art restorer is painfully slow. Niles insists that dinner must be served immediately. He discovers Frasier, and they begin to argue, leading to more chaos. Daphne tries her best to salvage the evening, but an unexpected event prompts her to give up. Frasier consoles her by telling her that the disastrous party means she is officially part of the family. 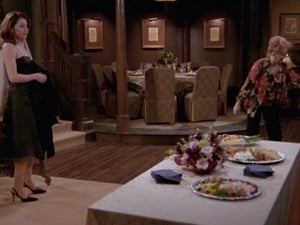 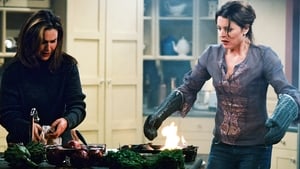